How to design a design conference? That question was still floating in the air at the 2014 Harvard xDesign conference. Aside from the nuts and bolts of format and logistics, these conference organizers are grappling with the design community’s own identity crisis: what exactly is design? Or, more importantly, what isn’t design? Because design seems to encompass everything and everyone. And that makes for a disjointed conference. The day’s speakers were individually compelling, but it was impossible to find a common thread across panelists. Depth was sacrificed for breadth. The contrast between Marimekko’s graceful, ethereal printmaking and Viacom’s “Tampy” the tampon ad campaign was jarring.

Don’t get me wrong – it’s wonderful that “design” and “design thinking” are becoming household terms. A materialistic culture is gaining awareness of the intentionality behind how the things in our lives are made. I don’t want to get possessive about the word “design.” But in order to avoid diluting the concept, I want us to use more words along with it. I want designers and creatives and commentators and conference organizers to dig into what’s going on in the nebulous “design community.” So I’m picking out one common theme I heard across the panelists that resonated with me: If design will be everywhere, then designers will be everywhere, and we need to know how to create supportive working relationships across disciplines.

Minna Kemell-Kutvonen and Tiina Alahuhta-Kasko, representing Marimekko’s design and marketing teams respectively, explained how the two divisions work together. They break with the familiar paradigm where marketing and sales teams work outside of the design process. Instead, the Finnish textile company’s marketing team uses the designers’ original inspiration to tell the story of the line to the world. The two teams each have their own creative processes that run parallel, stemming from the same inspiration. This means the result is the company’s product as well as the core inspirational experience that customers can engage with using their own emotions and imaginations. The line between creative and non-creative is blurred. The design is truly inclusive.

Beth Jenkins, studio manager of Mary Howard Studio and Mary Howard herself have a classic “yin and yang” relationship. The two have completely contrasting communication styles. Mary explained how non-verbal she is: “I don’t think there are many truly articulate people on our set. We express through mood boards and visuals. Direction will often just be ‘Is it too…’ and that’s it.” While Beth identified as very verbal, playing a crucial role in communicating with and calming clients. Beth described Mary as “reactionary” and “impatient,” a “drill sergeant,” “perfectionist,” seemingly a quintessential finicky and oppressive Creative Genius. And yet, Beth recited these descriptions with a smile on her face as Mary stood right at her elbow. As I listened to them, I wondered what it takes to bridge a creative and non-creative. And it seems to be a humility and mutual respect that keeps them from tearing out their (and each other’s) hair. Beth went on to explain how she loves providing order and business savvy to the chaotic lives of creatives. Mary explained she owed it to Beth for building the studio into a well-oiled machine that has become a global brand. Other designers must bow to Mary’s eccentricities (all start off as her assistant), but Beth has an independent skill set that is crucial and complementary. 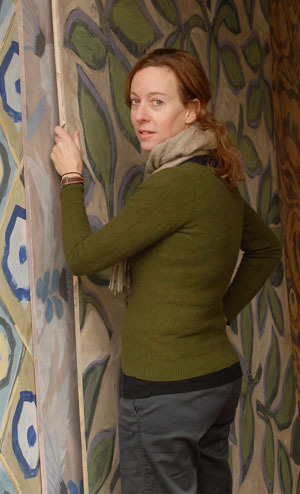 Jessica Brillhart joined Google’s Creative Lab in 2009, when the company was realizing it needed a consistent aesthetic and compelling video materials. As a filmmaker, Jessica’s task was to make Google’s often deeply technical work accessible to the general populous. Before her time, videos involved panoramas of power plant sites and used animated arrows to focus the viewer’s attention. How do you find relatable human story in scientific, inanimate data? Jessica took a personal approach: to find the human story, she found the humans. She did her homework on quantum mechanics and she spent time with the individuals behind the data. Through this process, she has invited viewers into Google’s boundary-pushing developments and she has built vital bridges within Google’s diverse organization.

Finding the Gray between Yins and Yangs

These five women and these three companies modeled for the audience what creative and non-creative might look like. There are verbal people and there are non-verbal, there are linear and there are iterative, there are calculated and there are improvisational, there are those who focus on things and there are those who focus on feelings. Listening to them, we could suss out what this dichotomy might involve. But we could also see how that dichotomy can be a false one, the chasm between the two sides only a perceived one. It’s these bridges and gray areas that we need to pay attention to as design becomes ubiquitous but personalities, working styles and (especially relevant to the graduate school setting) training differences persist. Let’s step beyond insisting design is everywhere and explore how it can exist everywhere productively.